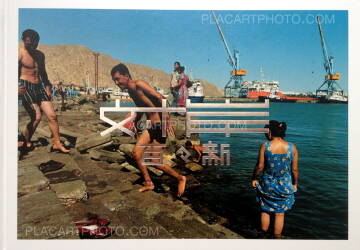 "Taigan" is a fine example of existentially serious travel photography. It's a work made from a series of trips Dodo Arata took to towns around the Caspian sea in Turkmenistan, Kazahkstan, Iran, Azerbaijan and Russia. "Taigan" means "opposite shore," and Dodo wanted to explore the idea that people in these towns are only faintly aware of what's happening on the other side of the Caspian. In a similar vein, he was searching within himself for clarity about his own future. His bold color snapshots strike a balance between documenting the social landscape of the countries he's passing through, as well as his own experience of traveling alone, more or less reliant on the kindness of others to make his way. Dodo isn't trying to cobble together a mythical "pan-Caspian" country through his photos; the book is clearly separated by country, and there's a warmly-written text for each one. These texts, together with the direct images of "Taigan," give the feeling of wandering along with Dodo.

Includes English translations of text by the photographer.