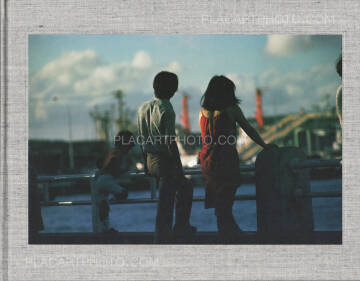 You could say Gocho Shigeo was a shooting star in the cosmos of 1980s Japanese photography. His career was too short and shockingly overlooked. It wasn’t until the 2013 reprint of his 1981 self-published masterpiece Familiar Street Scenes, along with an exhibition of color prints from the same book at Tokyo-based MEM Gallery, that Gocho finally received much deserved recognition.

Diagnosed at age 3 with a rare degenerative disease, which stunted his growth to 130cm, Gocho spent his entire life knowing his days were limited. As a result, he looked at the world from a dramatically altered perspective. Whether physically or mentally, all of Gocho’s photographs convey a similar feeling of sadness and tenderness. There is a strong connection to childhood as demonstrated by the numerous emotional portraits of children in this books.

I wasn’t familiar with Gocho and his background as a student of the well-known photography teacher Kiyoji Otsuji until I came across his black-and-white self-portrait on the front cover of issue #8 of the early 1990s Japanese photography magazine Déjà-Vu. Gocho shown standing with his back to the wall is framed by one of his Rorschach drawings. Within this image, the temporal and haunting ephmerality of Gocho’s bent-over silhouette is a perfect introduction to his photographic vision.

On first viewing, Familiar Street Scenes appears an optimistic collection of street photographs taken from April 1978 to October 1980. At the time, Gocho was commissioned by the city of Yokohama to take photographs for their public relations magazine, which was designed by Chu Machiguchi, father of the publishers of the same name. Despite being photographed in a variety of locations that include Yokohama city and the Tokyo districts of Shibuya, Shinjuku, Ueno, Shimokitazawa and Ginza, there is a visual uniformity of space, time and familiarity that permeates all these images.

Gocho captures fleeting moments of pure happiness as Familiar Street Scenes opens with a joyful pair of friends and closes with an unusual, yet comforting family portrait. Having shot the entire series with Kodachrome film, the colors in this book are extremely dense (see the red!), rich and warm and perfectly capture a distinctive light as it falls upon faces within the urban crowd: salary men vaguely smile, clowns look sad, and kids feel either distant or trapped as shown in the image of a boy who watches a parade from a curtained window. Light and shadow, youth and age are reoccurring themes in Familiar Street Scenes, and are reminiscent of his 1977 masterpiece Self and Others. In this reprint of Familiar Street Scenes, Japanese publisher Yagisha has done a great job of printing the photos from digital scans taken from the original Kodachrome prints. Within this limited edition reprint is the original sequence from the 1981 book along with 27 previously unpublished photographs.

Photographing couples, families and children at close range, Gocho’s street photography is always masterful. The photographs on pages 52, 59 and 79 immediately bring to mind Philip-Lorca diCorcia: Streetwork from more than a decade later. I was impressed by how contemporary Gocho’s photos continue to feel – like the image on page 54 that could be awoman holding a cell phone, or the view of contemporary parenthood on page 41! Gocho’s talent lies in the way he portrays the crowd’s insouciance and enjoyment of consumerism, while always reaching for what he calls the ‘‘shadow of human existence” at the ”periphery of consciousness.”

I highly recommend this beautiful and emotional photobook for both those with a specialized interest in Japanese photography and a general photography audience. With over 30 years since the publication of the original Familiar Street Scenes in 1981, this reprint is long overdue.