We Have No Place to Be 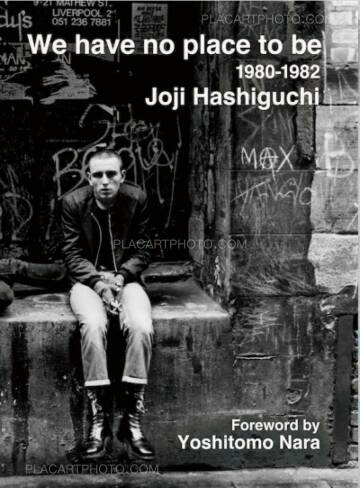 Joji Hashiguchi
We Have No Place to Be

As society careened on a precipitous tilt, a generation of displaced youths fled their homes and schools, seeking refuge on the streets. Theirs was not only a flight, but a veritable fight against the stifling framework of an increasingly prescriptive life. In the early 1980s, Joji Hashiguchi similarly took to the streets of Tokyo armed with a camera, and began documenting these young compatriots in his debut work, Shisen. Before long, Hashiguchi would himself take flight – the Tokyo streets a runway for a larger world that beckoned outside Japan.

Recalling long high school nights spent listening to the Beatles, Hashiguchi first landed on the streets of Liverpool and London. Having encountered Christiane F.’s sensational 1978 autobiography, Wir Kinder vom Bahnhof Zoo (We Children From Zoo Station), he made his way from England to West Germany, traveling through Nuremberg and West Berlin. A budding Beatnik, he forayed even further West, at last arriving in New York. Over the course of his journey through these five cities, he sought to depict each through the youths that populated their streets.

Through his lens, we encounter an America exhausted by the Vietnam War. England under Thatcher, mired in rising unemployment and economic doldrums. West Berlin, on the frontline of the Cold War. Japan, erecting the scaffolding of her now labyrinthine bureaucratic society.

Nearly four decades out, Hashiguchi’s We Have No Place to Be: 1980-1982 challenges present-day viewers to reexamine what we have both become and lost.

The complexities of youth have served as a captivating theme throughout the annals of photographic history. Photographers such as Danny Lyon, Karlheinz Weinberger, Bruce Davidson, Larry Clark, Nan Goldin, and Joseph Szabo made masterpieces with their investigations into the subcultures of renegade bikers, street gangs, and rebellious adolescents teetering on the dramatic cusp of adulthood. Similarly, photographers such as William Klein and Ed van der Elsken have produced distinctive street photos, famously snapped across the world’s metropolises in the 1950s and ‘60s.

However, Hashiguchi is distinguished by a uniquely unwavering dedication to this theme. The sheer breadth of his travels in Tokyo and the West alike, coupled with a rapt intensity for documenting the “troubled youth” of the 1980s, culminated in a valuable document of an era.

Above all, Hashiguchi’s photos evince a preternatural ability to capture street youths in an unmediated, unguarded, intimate state. Eschewing a forced approach, Hashiguchi seemingly earned ready acceptance into the communities he photographed. Far from the clinical observer shining a floodlight on the city’s scars, Hashiguchi was understood by his subjects to be a sympathetic eye in their flailing struggle against authority and the contradictory injustices of society. As Hashiguchi reminisces, “I suspect their willingness to be photographed was in large part due to the simple fact that I was Asian.”