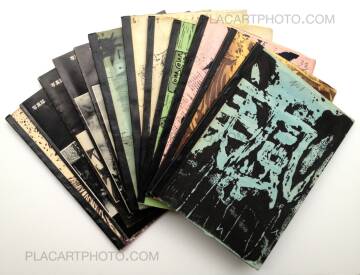 Comments: Softback with various cover process (silkscreen, drawing,printmaking,woodblock print) with xerox and diazotype printing for the main publication and 4 publications in offset (vol 8,9,10,11)

The Bifuu magazine (1985-1990), founded by photographers Kenshichi Heshiki and Tatsuhiko Kano, emerged from independent photographic movements born in the mid 1970’s. A first movement called « Aman », composed of nine photographers split after one year to form a new one, « Nujun ». The Nujun artists used a photographic process, the diazotype, close to the cyanotype process with blue prints and started printing handmade photobooks. Inspired by this movement, Kenshichi Heshiki and Tastuhiko Kano create Bifuu, a magazine designed by photographers from Okinawa only, to promote their work. Each photographer was free to choose themes of their own, which explains their diversity in the magazine : views from Taipei, performances, cock fights or Mao Ishikawa’s photographs of her trip to Philadelphia,… A « Bifuu » exhibition was also organized. Composed of twelve volumes, the first issue, published in 1985, was printed in a limited edition of 100 handmade copies with different cover processes (silkscreen, drawing, woodblock print,…). From the issue number 8, Bifuu was published in a less handmade way, printing mostly in offset, because the audience and the number of photographers increase, then finally comeback to an artisanal way for the last one, the issue 12. Three other issues will be created by Kenshichi Heshiki in the same kind to focus on his own photographs.

Bifuu is a very original designed and unknown magazine dedicated to photographers from Okinawa.